Objectives.  The purposes of the present study were: 1). To study the relationship between different concentrations of the chiral terpene enhancer D-Limonene (D-LM) on the solubility of individual enantiomer and racemate Timolol maleate (TM).  2).To study the preferential enhancement effect of D-LM upon individual S-TM, R-TM,and the racemates across the hairless mice skin. Method.  For the solubility studies, excess amounts of R-, S-, or racemate used using different concentrationsof D-LM (0, 0.25, 0.5, 0.75, 1.0, and 1.5% v/v).  The samples were agitated, centrifuged and filtered through a 0.45micg filter and analyzed by HPLC using chiral column at 294-nm.  For the skin transport studies, formulations containing 0.5% solutions of S-TM, R-TM, or racemate in a mixture of phosphate buffer and ethanol (3:2) with various concentrations of D-LM were studied usingside-by-side diffusion cells. The ports of each cell were capped and samples of 1 ml were withdrawn from the receptor compartment and analyzed for their drug contents by HPLC.  The steady-statefluxes (Jss), permeability coefficients (P) and the Enhancement Factor (EF) were calculated.  Results.  In the solubility studies, D-LM significantly enhances the solubility of all forms of TM in the tested formulations in aconcentration dependent manner.  In the permeation studies, presence of D-LM significantly enhances the flux values of both individual enantiomers and racemate.  However, D-LM immensely increased all permeability characteristics of the S-isomer relative to those ofR-isomer.  Conclusion.  The solubilities of the all forms of TM were found to be a single-valued function of D-LM concentration.  Moreover, addition of D-LMhas enhanced the transport of S-, R-TM enantiomers as well as that of racemate TM across hairless mice skin.  For the test formulations, the overall permeability characteristics of the therapeutically active S-TM were superior to those corresponding to the R-TM either as enantiomer or racemate. 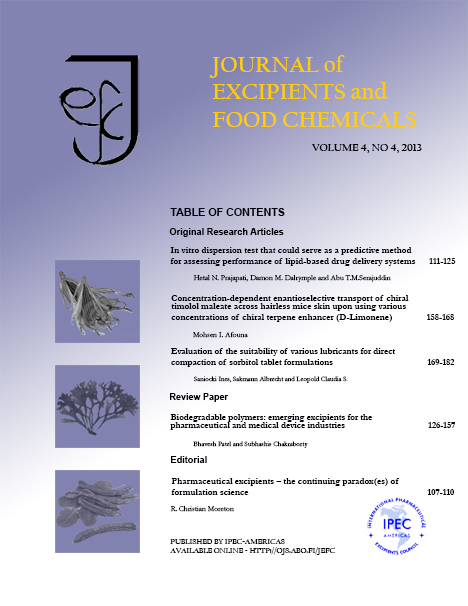 Terpene enhancers, Chiral, Limonine, Hairless Mouse, Enantioselective, Skin Transport
Authors who publish with this journal agree to the following terms: Authors retain copyright and grant the journal right of first publication with the work simultaneously licensed under a Creative Commons Attribution License that allows others to share the work with an acknowledgement of the work's authorship and initial publication in this journal. Authors are able to enter into separate, additional contractual arrangements for the non-exclusive distribution of the journal's published version of the work (e.g., post it to an institutional repository or publish it in a book), with an acknowledgement of its initial publication in this journal. Authors are permitted and encouraged to post their work online (e.g., in institutional repositories or on their website) prior to and during the submission process, as it can lead to productive exchanges, as well as earlier and greater citation of published work (See The Effect of Open Access).