Gum was isolated from the the bark of Buchanania cochinchinesis (Family: Anacadiacea) and was used as a release modifier for the preparation of Diclofenac sodium spheroids, using the extrusion spheronization technique. The process was studied for the effect of variables to arrive at spheroids with satisfactory particle shape, size and size distribution. The prepared spheroids were characterized for surface morphology, qualitative surface porosity, friability, bulk density and flow properties. The in vitro release studies exhibited a first order release kinetics that were confirmed by Higuchis and Peppas models. A credible correlation was obtained physico-chemical parameters of gum and in vitro dissolution profile of the spheroids. In the comparative study we found that the developed spheroids were not able to sustain the drug releases over 12 hours. A greater concentration of Chirauli nut gum may produce a formulation capable of significant sustained release. 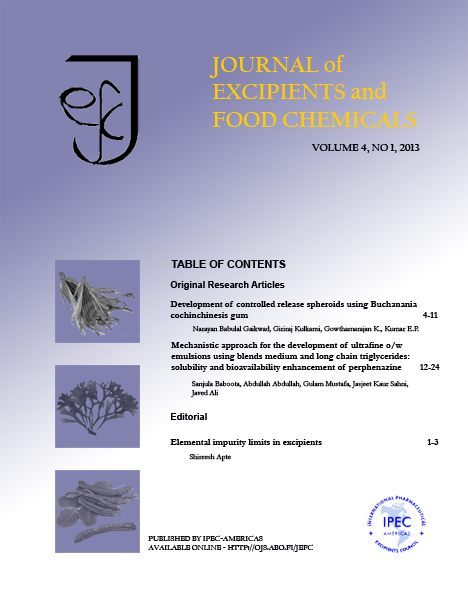 Spheroids, Buchanania cochinchinesis, extrusion-spheronization, gum, Higuchi, Peppas
Authors who publish with this journal agree to the following terms: Authors retain copyright and grant the journal right of first publication with the work simultaneously licensed under a Creative Commons Attribution License that allows others to share the work with an acknowledgement of the work's authorship and initial publication in this journal. Authors are able to enter into separate, additional contractual arrangements for the non-exclusive distribution of the journal's published version of the work (e.g., post it to an institutional repository or publish it in a book), with an acknowledgement of its initial publication in this journal. Authors are permitted and encouraged to post their work online (e.g., in institutional repositories or on their website) prior to and during the submission process, as it can lead to productive exchanges, as well as earlier and greater citation of published work (See The Effect of Open Access).